My three weeks of French life has officially begun. Since calming down after my brief spell of hysteria, things have been rocking along perfectly.
The weather is 95% stunning. Obviously, I’ve brought some of the north of England’s weather with me, just to remind me that I do have to come home to the delightful rain at some point. Don’t want to get too comfortable and forget I’ve got the joys of frantic linguistics work to look forward to in October. Luckily, it only really rains very early in the morning, so the biggest inconvenience it poses is the rattle of it wakes me at 6ish, and the hammock is slightly damp. 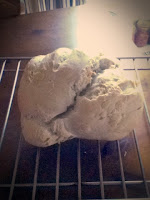 I’ve learnt how to make bread (!). The trick is, beat it up as much as you can. Don’t worry if it weighs a tonne, people will politely eat it anyway, and commend your first attempt even if it tastes like someone’s baked a rock. (Point of science- how can 550g of flour, two sachets of yeast, tablespoon of salt, and 350g of water turn out as two different weights each time? Answers in the comment box/postcards please, genuinely baffled.)
I’ve been rockclimbing. Yep. Me. It’s the first extreme sport I’ve done since Sam/Jack/Sara dragged me off to do that bloody wakeboarding thing a few years ago. You can imagine how terrible I was at being flung around a lake on a piece of plastic. Where there is a voluntary situation that could potentially put my life in danger, I know from lots of near misses over my life to opt out. I don’t have the best of luck getting up the stairs in a straight line, so when my host, Alex, asked me how my rock climbing was, I had to really resist the urge to openly scoff.
Not wanting to miss out on any fun, I decided to give it a go. I took a book in case I was too afraid to try it out, anyway. Arriving at the rockface with a bunch of Alex’s friends, the wall didn’t look half as terrifying as it had been in my head. That was until I saw the pro-climber of the group clamber up in order to arrange the ropes. He looked so tiny all the way up there. This didn’t seem like a good idea any more.
Too soon it was my turn, and once I’d managed to get the harness on, take it back off, and replace it so that it wasn’t upside down, I was off. Climbing is surprisingly easy. Strategically, it was difficult, and when you couldn’t find anywhere to place your dangling foot it was pretty strenuous- but over all I enjoyed it. Once you’ve got comfortable doing it, and got some decent grip, it’s just like a weird, vertical crawl.
Coming down was the scary bit. Your life/spine lies in the hands of the person who is holding a corresponding piece of rope at the bottom of the wall. You have no option but to trust that they can manage the weight, know the pace you want to abseil down at, and aren’t going to drop the rope. Lean back, feet flat, and try not to dangle. The rush of being dropped down a foot too fast isn’t pleasant, but I guess it’s over faster that way.
When I’m not busy scaling rockfaces or being a housewife, I can usually be found in the Best Place On Earth.

Ah, the hammock. If I end up never returning to England, then this hammock is your best bet of finding me. I’ve already ploughed through my first Bill Bryson book on it. I’ve just about mastered not rolling off. I know exactly where to aim for when jumping on. I’ve not yet figured out how to make it rock slightly without kicking off from the ground, but there’s plenty of time to suss that one out.

When I’m ready to roll into bed after a hard day reading and helping around the house, I just scuttle inside this bad boy and get my head down. It’s very bloody different from my camping in Whitby experiences. First of all it doesn’t leak. Second of all I don’t have to share it with two snoring sisters which is a novel change. Only downside is that I’m on hyperalert for spiders/other creepy crawlies during the night, and spend the first hour before I drift off meticulously checking every inch of the mattress/duvet for hidden demons with more legs than necessary.
The host is cool, the host’s friends are cool, the Czech couple also workawaying here are cool. The guy plays guitar and sings into the middle distance a lot, so I have a nice little backing track to my reading sessions on the hammock. I’m really loving it here.

To put it as politely as possible, I was absolutely beside myself as I boarded the plane to Bordeaux at Gatwick on Wednesday. Hysterically sending last minute texts before having to turn off my phone for the next three weeks- if I’d have received just one message that said “Don’t go, Farrah“, I would have taken it as a God-given sign and marched right out of the departure lounge. I probably would have passed out from hysteria had anyone phoned me to wish me luck or say goodbye.

Having experienced a less than successful workaway situation before, perhaps you might naturally attribute this overwhelming desire to sod the plane tickets and wedge myself firmly between my duvet and sheets for the upcoming three weeks instead is down to my little drama in Turkey.

But I’d have to disagree with you. My new workaway placement had excellent reviews (more than can be said for the Turkish one), and I’d spoken to my new host a handful of times on facebook- which relaxed me (and mum) to no end. The place looked gorgeous from the pictures, I was pretty much completely prepared- as far as I ever “completely prepared” for anything- and was looking forward to my French adventure.

So why the nerves? I’d never been this way about anything like this before. I wasn’t afraid of flying- I was with BA, not Jet2 this time, far too many rich people to risk crashing or anything silly like that. I wasn’t particularly afraid my new placement would turn out to be rubbish. I’d done ample catching up and spending the highest of quality time with the family and friends. I was to return to a newly boxed up house somewhere in Holmfirth (yes- moving again- don’t mind me) and then straight onto York, where I’d return to my part time job, which I missed, frankly, and back to another year of linguistics and The Yorker business.

Honestly? I don’t know what brought it on. I was shaky and brimming with dread- though I have no idea what of. In fact, it took until I entered my stopover hotel in Bordeaux for the nerves to subside. The receptionist gave me my key and I pottered off to bed a calmer and much more normal version of myself.

It’s the first time I’ve ever felt that unsure of my plans. I genuinely felt nauseous, and utterly convinced something terrible and scarring was going to happen to me. From a rushed farewell at Clapham Junction to the shabby lift of Hotel Clemenceau, I was 100% certain that I was going to either throw up or run away. Maybe it was because I didn’t feel as prepared as I had been for Turkey- and look how that ended. Though maybe it’s because Taken is set in France.

As quickly as the dread came, it filtered away as the lift rose to premier etage. Possibly because I hadn’t been kidnapped yet. Probably because the receptionist was gorgeous. Either way, when I woke, I ambled down to the train station and made a nuisance of myself trying to find my platform, boarded my train, and sped towards Perigueux, happy and excited.

It looks like no decent pictures for my French adventure- the camera I’ve borrowed is inexplicably shouting at me to turn it off every time I try and take a picture. Bit like when people try to wake me up early really, so I have some sympathy. Though I’d usually use much more colourful language than Panasonic have chosen. Anyway, yes. My iPod’s camera quality will have to suffice. Sorry!