I guess I’d better go into this snazzy job then, hadn’t I?

Last week, I announced/found out that little old me had been offered a job in the big city, and I’d be starting as soon as my exams in York were over. Once I’d been reassured that gravy does indeed exist south of Yorkshire, I accepted the position with relief and enthusiasm.

Relief because I now don’t have to worry about life immediately after university; I can focus on my exams and not mix in job applications with essay deadlines. Enthusiasm because the job is way cool.

I’ll be interning with the impressive and inspiring GoodPeople- specifically on their newly set up Pop Up Talent Project. Pop Up Talent’s aim is to reduce youth unemployment (starting with me…) by giving them the opportunity to develop, show off and apply digital skills. I’ll be doing the backstage stuff. And grinning constantly.

It’s cool because I get to try out different aspects of the project, it’s a pretty small team, and it’s a cause I care about. I can’t wait to get my teeth into it, which is a good job because I start in little over five weeks.

Still househunting (if anyone knows a room going in South West London, holla at me), and now armed with an employment contract, a load of TED talks/inspiring books/links about creativity and employment and the general yoof, it’s all starting to feel real. And exciting.

I LOVE going for meals. It upsets me that society limits us to two “going out for a meal” opportunities a day. I’d quite happily walk from one three course meal to the next day, all day, every day. Here’s where I’d do it in York- a city of beauty and glorious, glorious food.

5. Melton’s Too
Looking for some proper Yorkshire food? Good, because there’s stacks of it in the deceptively massive Melton’s Too, on Walmgate. The best thing about this tasty, tasty stuff is it’s also got a Yorkshire price tag, with Early Bird Menus at £13 each. Did I mention the real ale? Yup, if you’re looking for somewhere to soak in a Yorkshire pub atmostphere with just a touch more chic, then book a table here immediately.

4. Ambiente
On the edges of the city centre, past the Minster and up Goodramgate, Ambiente is the most authentic Spanish experience you could possibly find in York. They have a huge range of delicious- and I mean delicious- tapas. If you don’t order their paella, then you’re doing it wrong. Reasonably priced, with a wonderful atmostphere and insanely knowledgeable staff. Get yourself a jug of sangria and settle in for the night- with tapas you can just keep on going and going and…

3.The Lime House
CONFESSION: I work here. That doesn’t mean I don’t love coming to eat here, even if I twitch every time the phone rings in the middle of my meal (!). Come at lunchtime, ask for table three/four, order a large glass of white, the mushroom risotto to start, the duck for main and the sticky toffee pudding for desert, and thank me later. (Plus the service is golden, naturally).

1. Nineteen
Nineteen, tucked away on Grape Lane, is my number one restaurant in York for pretty simple reasons. The food is delicious, the wine servings are generous, the rooms are so quintessentially York- creaky and quirky-, and the service was a charm. Order the trio of lamb and let it melt in your mouth. DO NOT forget to order the triple fried chips, because you will secretly harness a hatred for your boyfriend for denying you them for the rest of your life.

So, that’s it. I’d also like to shout out to Siam House, the best Thai food I’ve ever eaten, who only narrowly missed out on being on this list by inconveniently closing a few months ago. We miss you, Siam House.

Where did I miss off? Where should I go next? There’s so many places in York I can’t wait to get my jaws around…

My London adventure started off with all the usual mishaps and flapping around that generally accompanies me wherever I go. The standard stuff, like running for buses that may as well have “FU” instead of “No.44″ in lights on the front, and having a minor nervous breakdown upon the realisation that I’d forgotten my railcard when I arrived at the train station. This trip, potentially career changing, was off to a good start.

Emma Bennett and I were heading to the Big City for a careers Open Day, run by the Creative Pioneers folk, and I also had an internship interview. This was a massive step in the right direction for me- namely the Taking Active Steps Towards Avoiding Lifelong Unemployment direction. It had to go smoothly, or else I’d sulk for ages afterwards.

Arriving in the capital, we were at a bit of a loss as to what to do with ourselves for the next 15 hours before our little career day. After a little bit of googling “Places in London”, we decided that Leicester Square was as good a place to start as any, so embarked on an unnecessarily troubling tube-trip, found ourselves in the midst of a buzzing city centre, and did what any Northern girl would have done in that situation. We went to the nearest bar.

Ordering a bottle of wine and a sharing platter, we nestled ourselves down and recounted everything we had learnt about London. They used weird teabags here. They run everywhere. The Tube isn’t as complicated as the map makes it look. Leicester Square has a M&Ms world. We even managed to come up with a pretty solid reasoning on geographical cultural differences within the UK.

“In the south, they don’t have time to chat to everybody. Think about it, that’s why it’s such a culture shock coming up North. Up North, you’ve got to make best mates with a bus driver, the parking guy, the ticket-checker, the fella at Costa, and the receptionist before you’ve even got to work. Here, everything is a machine and it gets shit done. No faffing about making friends with every bugger you walk past. I’m busy, I don’t want to be your best friend, bus driver.”- Emma Bennet, North/South Philosophiser.

Having solved this great cultural mystery, we proceeded to skip a main meal and go straight to dessert; two slices of pecan pie and four shots of Goldschlager. Next, onto the nearest place that offered us free drinks for a dance with some bad-breathed Australians. I think we must have been quite drunk by the end of it all, because we ended up taking selfies sat waiting for a tube at quarter to twelve. 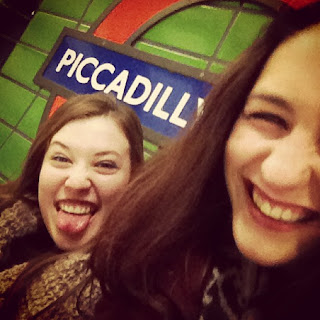 To sober us up, we bought some toothpaste at a corner shop, trampled around the King’s Cross area trying to find our hotel, and engaged in a little chat with a stranger who rather impolitely, and I daresay aggressively, told us we needed to give him 20p. Luckily, the direction we ran from him in happened to be the way to the hotel, and within minutes we were tucked in bed watching some Superskinny/Supersized pseudo-documentary. All in a night’s work.

Up early the next day, with our 20ps intact, we got dolled up and set off to my interview. It had been arranged for 10.30 and -feeling overlyconfident about the Tube- we set off at 9.30, and immediately got on the wrong train. I was almost twenty minutes late to my interview, and gave myself a whistlestop tour of many back streets of the city centre trying to find the right building. By some small miracle, the woman interviewing me empathised with my Northerner-down-south-distress and all was forgiven and, thankfully, my internship secured.

“London is exhausting” we concluded, slumped down on the train home later that night. Then Emma accidentally kicked the armrest of the person in the front, sending their arm flying. We quietly pissed ourselves laughing for the two hour journey home, and I swore to myself that next time I came to the capital, I’d bring Emma. Or a map.

Not something you expect to hear in the middle of your lunch, but I guess rare birds don’t tend to make a habit of swooping, killing and eating a pigeon in front of a crowd. Not least while the crowd is halfway through their brocolli and goat’s cheese soup, anyway.

This is why I love the Lamb & Lion. Not because hawks murder pigeons in the courtyard on a regular basis (apparently that’s only happened once, we were -ahem- lucky to catch that spectacle), but because there really is something unusual about this pub.

The food isn’t the always greatest in the world- the horseradish to beef ratio on my sandwich was too disproportionate for my liking, and I’m not afraid of a good hunk of spice- but the setting is wonderful. Candles light up every cranny of the crooked ceilings, everything seems like it’s eased into the building over a period spanning centuries. It feels like a proper York pub- one you couldn’t possibly imagine in any other city.

The service, unfortunately, has let it down before. Having been twice, I was once overcharged (my maths didn’t catch up with me until later that day, too late to ask for it to be recalculated), and when visiting with my parents, they managed to forget a main ingredient on my stepdad’s order. When asked where the bacon was in the “Poached egg and bacon salad” at the end of our meal, having had no chance to catch a waitress beforehand, we were told the chef was having a bad day, and we could have a slice of bacon brought out if we really liked. We politely declined.

Despite this, I wholeheartedly recommend this pub to everyone. Yes, the staff may have sort of bumbled through service, but I genuinely think they were honest, mistakes. They’re always lovely and pleasant, and the fact I’m overlooking being charged six quid for two half pints of coke to urge you to go should speak volumes, really.

The Lamb and Lion is the most York-esque pub in the city. The building is fascinating, and all food and drink is sourced locally. The rooms are a fantastic shabby-chic, and the service is well-meaning and the atmosphere is ideal for a good catch up and a little marvel on how beautiful this city is. And you might even catch a David Attenborough-style live show out of the window.