I’ve been struggling with something for the past nine days. It’s not been the biggest struggle I’ve faced- still not managed twerking- but nonetheless it’s been in my peripheral vision for over a week now. Like when you fall asleep wearing a contact lense and when you wake you’ve got a feeling it’s slipped round to the other side of your eye. Gross, internal, and bloody annoying.

So I’ll just come out with it.

What is up with the New Year Resolution snobbery?

There seems to have been a trend over the last few years to staunchly mock and deride the very concept of a New Year’s Resolution. Silly humans!  cry the mockers (at every fucking opportunity), if you’re unhappy with your ridiculous life, you don’t need a set date to change it! You are puny in your attempts to better yourself. The coming of a new year ought to have NO SIGNIFICANCE whatsoever to your desire to quit smoking/lose a stone/learn Arabic- and if it does, it is somehow more meaningless than trying to do said resolution in June! Or September! Or any month other than January!!!

Well, mockers. The tables have turned, because I am here to deride YOU. 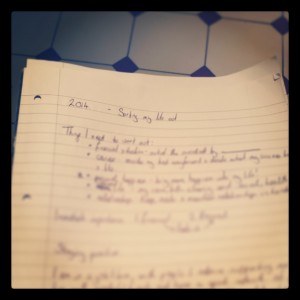 What is wrong, exactly, with having a new year resolution? What possible harm does it have for people to anchor positive life changes around a particular date? A date they can share with others, a date that by it’s very nature marks a new beginning? What I think has happened here is someone, probably Richard Dawkins/someone equally derisive-for-the-sake-of-it, spouted out some poo about the foolishness of the idiot humans who wholeheartedly want to change their life/outlook/health out of some sort of defence system for not wanting to change their own life/outlook/health, and their pessimism has spread like a snarky STD in a Magaluf bed and breakfast.

I for one will not be silenced. I am resolving to make my resolutions, with or without your approval, naysayers. In fact, as an act of spite, I have written a five page- FIVE PAGE- resolution detailing exactly how I want to better myself in the next twelve months. Every drop of ink that went into the 2014 edition of Shit I Want To Improve is not only going to become my bible, it is also intended as a tiny, -ink-drop-sized slap in the face of every person who thinks that it’s okay to chortle at “fatties” taking over gyms in January, because “let’s face it, they’ll be back in front of the fridge in February”, or leave patronising comments on someone’s Facebook declaration that it’s “a New Year and a New ME”. Ya’ll need to start being nicer. Incidentally, that’s on my resolution list. Page four.