I don’t want to potentially sabotage my career as something new-fangled and vaguely virtual, but I can’t hold this in any longer.

Where the hell did this all come from? I feel like some spoilt CEO’s kid went ‘hey pops- I bet you don’t even know what a hashtag is, do ya?‘ and in a mid-life crisis CEO daddy went out and paid someone to tell him what Twitter was for, and he just got a bit carried away.

Never, in the thrilling history of lists, has any industry written so many. Go ahead and google any given number and the words ‘social media’. I’d bet my bottom dollar that the first, oh, I dunno, seven pages, are dedicated to “Nine social media essentials” or “Thirty brands with a great social media strategy”. There is a new list every day to detail the impact some real social media engagement could have on your customer’s brand awareness or client facing visibility. Never has so little been said so extensively.

I DON’T EVEN KNOW HOW TO PRONOUNCE THAT NUMBER, GOOGLE. (The big long one. I know how to pronounce ‘twelve’. Shut up.)

I lurk on reddit. I’m obsessed with Tumblr. I read the Onion, check Oatmeal, watch Vine. I’m no special snowflake, neither- millions of other people do too. Millions of people, excluding, specifically, the social media managers of big brands. It is baffling how a meme is created collaboratively by the creativity and consensus of an unnamed virtual collective, all finding that particular penguin especially socially awkward, but the humour and warmth/wit of these tiny creations TOTALLY BYPASSES THE PEOPLE WHO MAKE MARKETING MEMES. 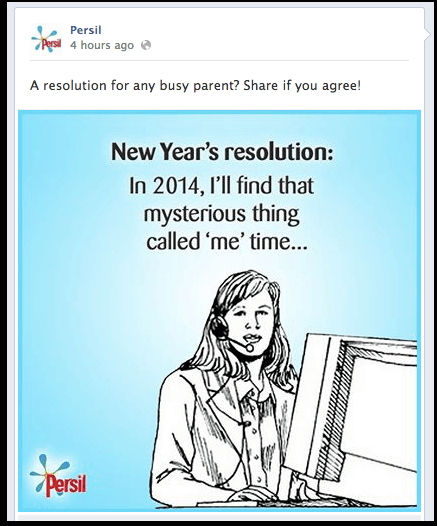 YOU CAN’T JUST STICK A LOGO IN THE CORNER PERSIL. ‘ME TIME’ HAS LITERALLY NOTHING TO DO WITH WHITER THAN WHITE WHITES.

Newsjacking, for those of your who live outside of the buzzword world, is when you jump on a bandwagon created by some news. It can be sweet or funny if the link between news and company is in any way relevant (a la Mothercare being psyched about the Royal Baby). Unfortunately, many brands seem to think world disasters, deaths or any manner of tragedy is fair game. Bizarre really- who would have thought a devastating hurricane would be the perfect opportunity to sell overpriced lycra hotpants? 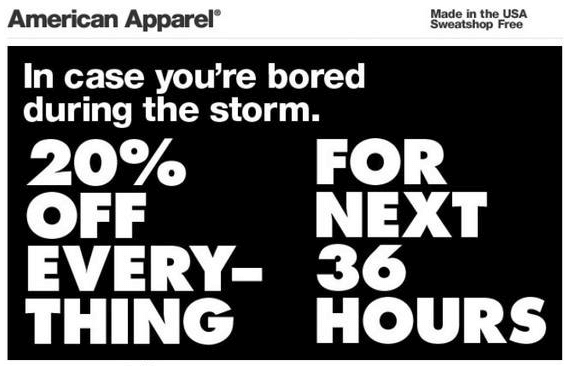 Dear American Apparel. No one is bored during a natural disaster. They are worried for their homes, loved ones and lives, not how much they can save on spangly disco pants. You attempt to be edgy and relevant has only managed to piss everyone off. Is your mind literally made out of mud and spandex? Sincerely, everyone.

Every so often, one company will talk to another company. Like they’re a peoples. Like Tesco, Asda and Waitrose are in fact just a bunch of guys, hanging round, tweeting each other grocery jokes. Sometimes it’s kinda fun, but some attempts at brand banter are just a little bit too desperado. Brands talking to each other is usually a sign of them trying to get noticed by BuzzFeed, if they’re big, but it is also a sign of some poor community manager holding out for some attention. 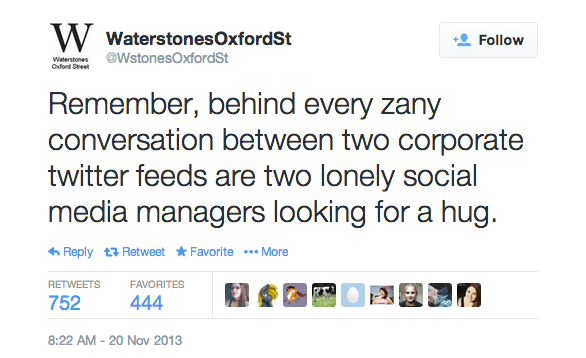 Hey you- friendly social media user who has already conveniently ‘liked’ or followed our brand page! We would like you-yes you- to not only be witness to a stream of corporate conciousness, but ALSO to be coerced into actively partaking in our social media bubble! Does that sound exactly like what you should be spending your valuable time on? It does?! Well come on down, because we have oodles of posts for you to pointlessly engage with. Hooray!

Charities should use social media. It’s an important way to raise awareness, chat to volunteers, etc.  All agreed? Cool. Brands, however, should not use charity to garner social media attention. You know why? BECAUSE IT’S UNETHICAL, THAT’S WHY, but also because it’s a bit creepy. 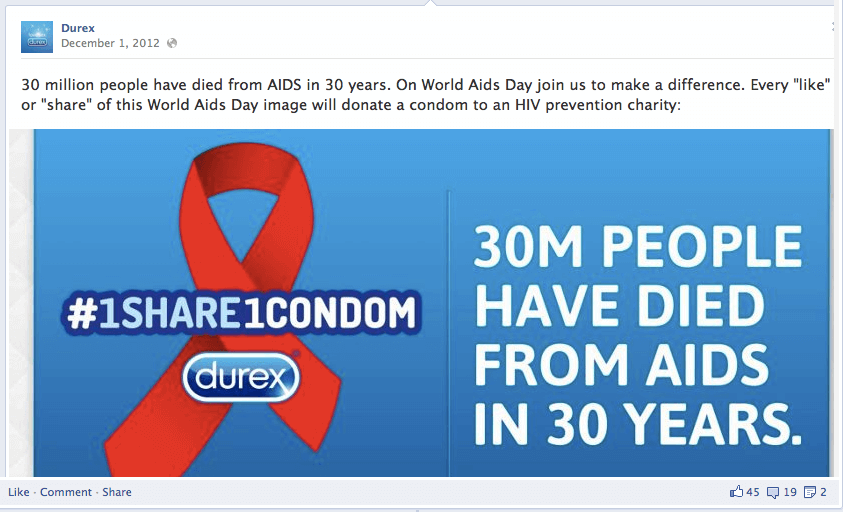 Durex are here implying that they help prevent AIDS, possibly the most infamous and horrible pandemic since the plague, if you- the unassuming audience- spread their name around for them. You know, the ol’ you scratch our back, we’ll fix AIDS. Which begs the question- if you knew you also had enough condoms spare/loads left over from your JLS over branding, why on earth should Jonny Blogs have to click a button before you actually do anything?

That aside, there is a whole world of pain attached to ‘clicktivism’. Surely this kind of irresponsible marketing campaign only adds to the feeling that by pressing a meaningless internet button you’re helping, instead of, you know, actually bloody helping. Anyway, I digress. Here is a relevant video.

Nothing. Infuriates me more. Than pointless. Fucking. Hashtags. 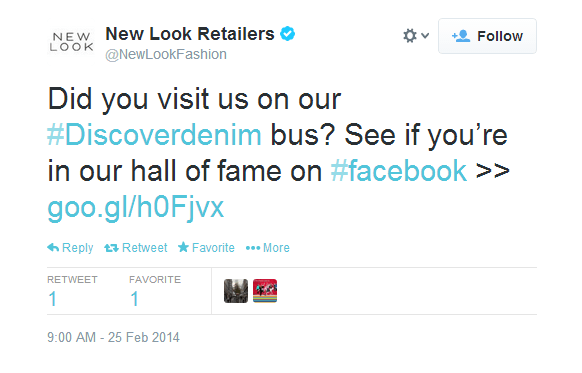 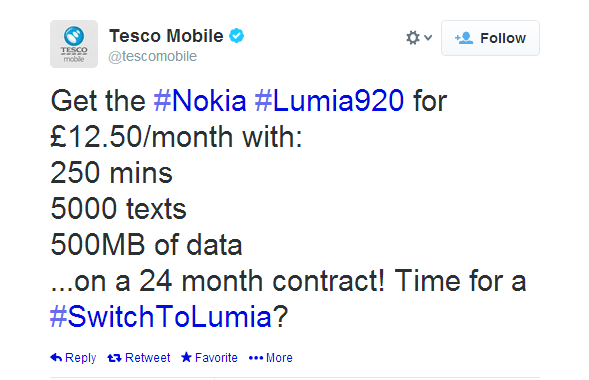 Do you think someone is going to USE this hashtag? Or casually search for it? Do you understand that hashtags are supposed to be a way of people following discussions over time? Do you think that anyone in their right mind is going to tweet that they are going to #SwitchToLumia?? Or say they are on their way to #DiscoverDenim- as though they’d never discovered denim before??? Or that for any reason after battling with your so-called ‘gamechanging’ COFFEE MAKER to make a brew is going to joyously tweet about their #NESPRESSO???? Do you think we are all idiots? Blindly crunching out company hashtags like content creating consumer machines? IS THERE NO DIGNITY LEFT IN SOCIAL MEDIA???

*breathes deeply*. So there you have it. Things I hereby swear to never do on social media, and thigns that will cause me to instantly dislike your brand. I’m glad that’s settled. Now, I think I need a lie down. A lie down as far away from a wifi connection as I can physically manage.