*deep breaths* I’m Farrah, I’m a feminist, and I think we need to get over the Protein World adverts.

I’m a feminist. I strongly believe that women are not treated as individuals in a plethora of ways, from catcalling to cultural marginalisation and under-representation. I believe that objectification is a ‘gateway sexism’ to the dehumanisation of women, leading to cultural acceptance of the mistreatment, belittling and violence women face. The Protein World advert, imho, is dangerous as well as lame.

In the weeks following the unveiling of the unimaginative, over-trodden sexualised and controversial tube ads from the ‘marketing pioneers’ behind Protein World, everyone (it seems) has formed an opinion on the billboards that literally highlight the value of a woman through June to August as her tits, froo, and the skinny bits in between bright yellow. 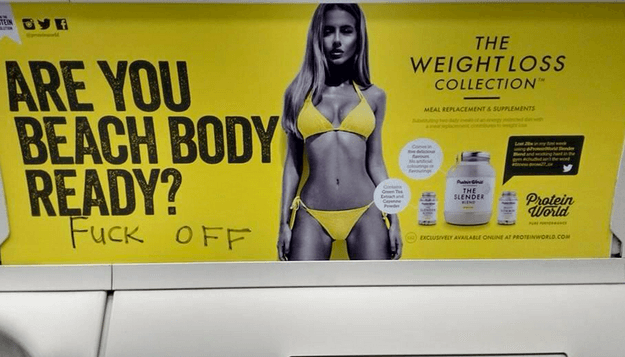 As you can probably guess, I’m not a fan.

I don’t like that it’s a weightloss pill. I think diet pills are icky and the advertising is manipulative and boring- and to be honest if it had been an advert for a bikini rather than literally a body type, I probably wouldn’t have even raised my bushy eyebrows. These ads validated people who think if someone is fat, they’re unhealthy. They made women whoa ren’t a size 8 with grade A+ boobs (i.e. nearly all of us) feel less wonderful that day. But we need to get over it.

A policy I’m trying to live by is to choose joy. It means walking on the sunny side of the street, not throwing a hissy fit when someone at work has used the last teabag, and changing my mindset to be more positive. It’s working wonders for me, and I think it’s a way of life that people who live on the internet could benefit from.

The advertising world is full of creative media types that don’t try to benefit from negativity. I spotted this advert from Whole Foods on my way home the other day. 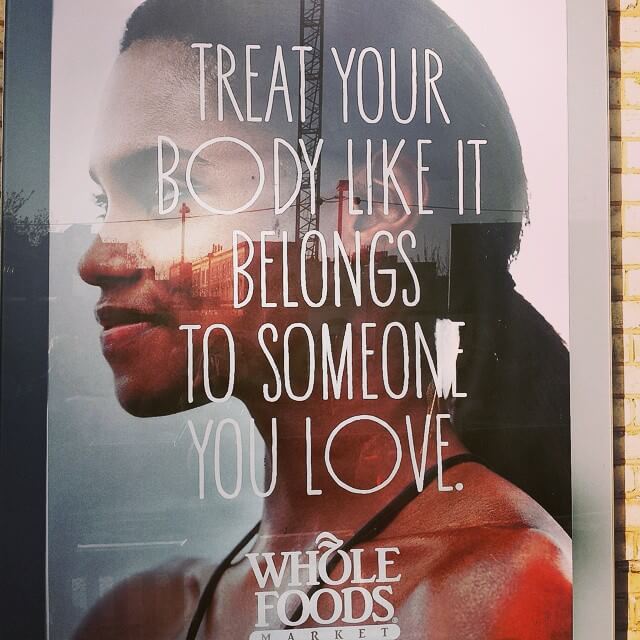 The drama caused by Protein World’s lame ass ad- which invoked no creativity or interesting brand identity other than ‘douchebags’- saw their profits soaring. Our anger is rewarding bad behaviour.

Instead, and maybe this is naive, but we should reward creativity, positivity and responsible brands with our praise.

Punishing brands doesn’t work if it just gives them free PR and a limo ride to roll up to the bank to. We can do better than that. We can demand for offensive crap to be taken down, but we can also prove to brands that we will respond to, and appreciate, messaging that isn’t designed to make s us feel like sweaty, ugly slobs. 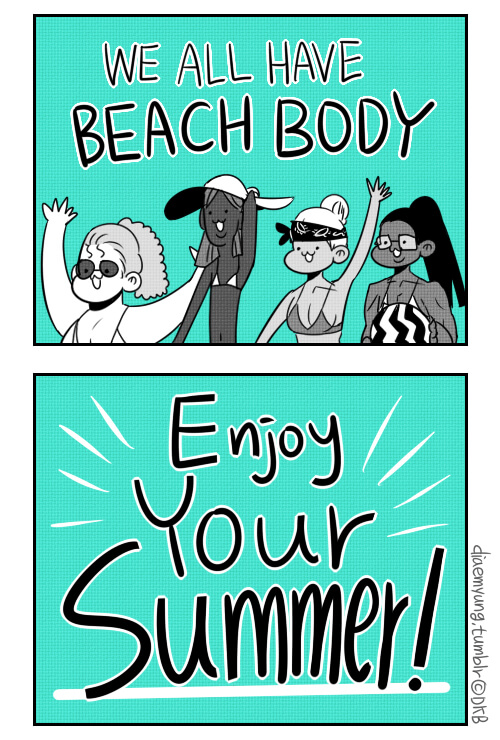 By moving past the crap, rather than waving our virtual pitchforks at it, we can send a message to brands that pissing us off isn’t good enough. If we want to stop being made to feel like this, we have to make a decision to use our anger in a constructive way, and to diminsh the power these shitbags have over us. We need to show more love for the good stuff out there. We’ve got this, guys.