First of all, a disclaimer. I will never care that it is uncool to watch Coronation Street. I come from a family who genuinely have Norris’ birthday on our calendar. My stepfather once sternly told off my younger sister for constantly asking questions during one particularly intense episode; “Look, it’s either going to be part of your life, or it isn’t”.

While at university, watching C.S. reminds me of being at home, and is generally my daily dose of the Mancunian accent I do tend to crave after not hearing the family’s voices for too long. It also gives my flatmates ample opportunity to mock me for being a little bit pathetic. For example; this week, Becky McDonald left the street, and I’m distraught. 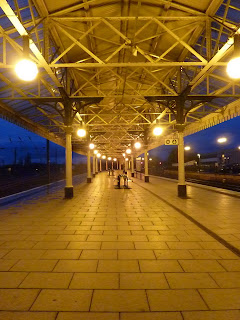 But here’s a couple of pictures anyway. (Variety being spice of life, etc.)

Taken on platform four of the train station, the train that takes me home to Huddersfield. Usually it’s quite busy, so this was a bit of a rare opportunity to have the place to myself.

This is my friend on Bonfire Night last year, in the campus Costcutters. I’d always wanted to catch a sneaky shot of the campus shop, but felt a bit too self concious getting my camera out, so this was a rushed affair. and on what planet pineapples are in season in the middle of November, I don’t know.

From my first few weeks in York, exploring the gardens on campus known as “The Quiet Place”. These bushes from the outside look oddly futuristic and (in my humble opinion) a bit over groomed.

This was “Mexican Night” in my halls of residence. Making fajitas for 18 people isn’t a job I take lightly.