There are a few things that bug me about travelling. Nothing too big, just the usual. Delayed flights, insect bites, being jealous of other people’s adventures. The same things that irritate anyone going away.

But there is one thing that I loathe. Utterly, utterly hate.

You know the ones. You’re in a touristy spot, you’ve just entered a church out of appreciation for it’s cultural significance, the architecture, the lavish embellishments and decorations, and maybe, if you’re that way inclined, for a spot of prayer/worship/religiousness. There is a sign at the entrance, written in several languages, welcoming all people indoors if they would be so kind as to observe dress rules and no take any photographs.

In you walk, ready for a spot of quiet observing. Then you see them. The Twats In Churches (TICs). Stomping around in short-shorts, strapless tops, making loud phone calls, farting as the flash of their camera blinds a passing vicar.

I wandered into a gorgeous church in Venice recently, and was silently apoplectic (that fabulous British mood) to witness some douchebag stood in front of the altar next to a sign asking people not to take photos. The service was about to begin- with people literally kneeling all around him- filming the organ music and people’s prayers with his fucking iPad.

Where do these people think they are? Are they lost?? Did they queue for an hour outside the Basilica thinking there would be a bloody theme park inside? Were they expecting showgirls?? Has this man totally lost his mind? 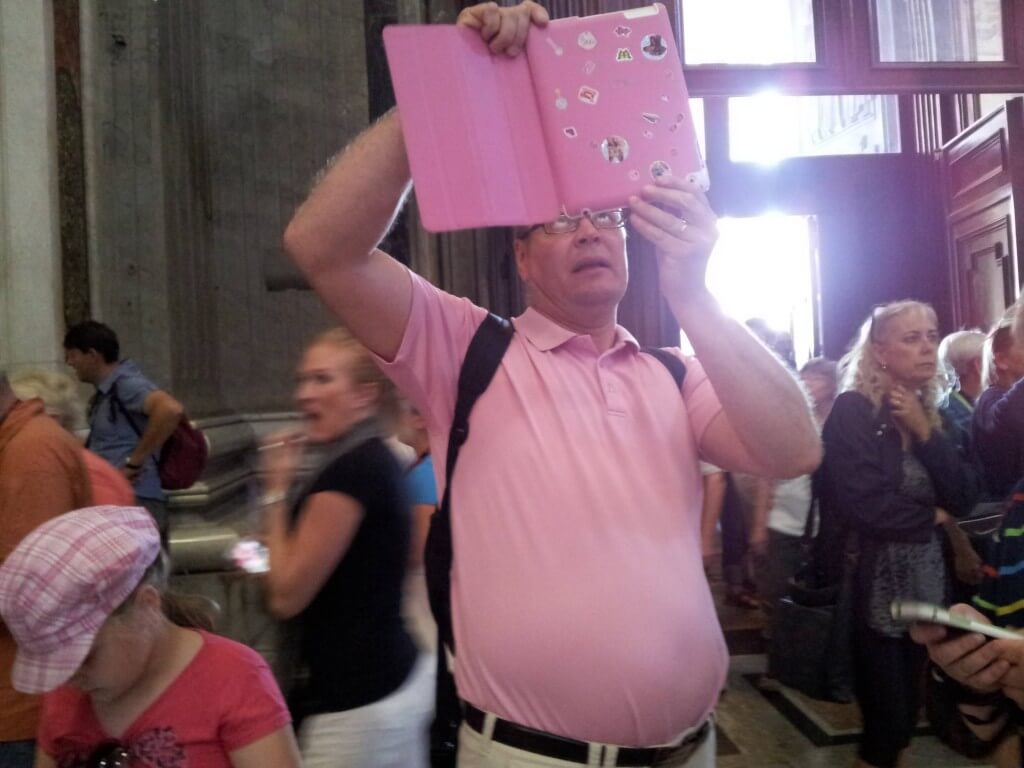 I have no problem with people capturing the inside of these buildings. None. I personally don’t do it that much, but I have done and I probably will do again. I have no beef with photos of ceremonies, recording the music, or with anyone that is even mildly interested in what the building is intended for. But these douchecanoes cross the line in two ways.

One: Respect what should be respected, dude. You might not believe in whatever deity the building you’re in was designed to worship, but the people around you, yeah those ones kneeling and praying, do. And let me tell you this, they’re not doing that to provide you with some top action shots, they’re doing it because they’re praying for their suffering or future or other stuff that does not need documenting by your dumbass iPad.

And, most of all, two: No TIC will literally ever watch or look at those badly-shot crap quality images of what is a supposed to be sacred place ever again. Anyone who is culturally buttheaded enough to record a private moment is not culturally interested enough to actually ever fucking look at it again. Which makes the whole selfie-with-praying-old-lady spectacle pointless.