As the world’s newest theatre critic, I had to see me some proper theatre. You know, the stuff they made you study at GCSE.

Having seen that The Young Vic had some cheeky cheap seats, I chirpily booked myself on to see The Cherry Orchard by Anton Chekhov. The Young Vic offers “Standing seats” for around a fiver. Thankfully, a “Standing Ticket”, doesn’t mean you’re watching from the wings with leg cramp- you have to wait with the other paupers until the people who paid for specific seats are settled in, then run in to nab the best remaining- which I guess is risky business, but I got a pretty good view.

I have to admit, I’ve always fancied myself as one of those luvvie types who can quote the rest of the Hamlet “To be or not to be” soliloquy. I’m also the type to call it a “soliloquy”, rather than “speech”. You get the idea.

The thing is, I’m not a very good one. I’d never heard of Anton Chekhov, or The Cherry Orchard. I had no idea what to expect, and had no idea how big this play is. With this in mind, please take my interpretation with a pinch of salt. I resisted every urge to google it all afterwards, so these are purely my own, poorly informed thoughts. 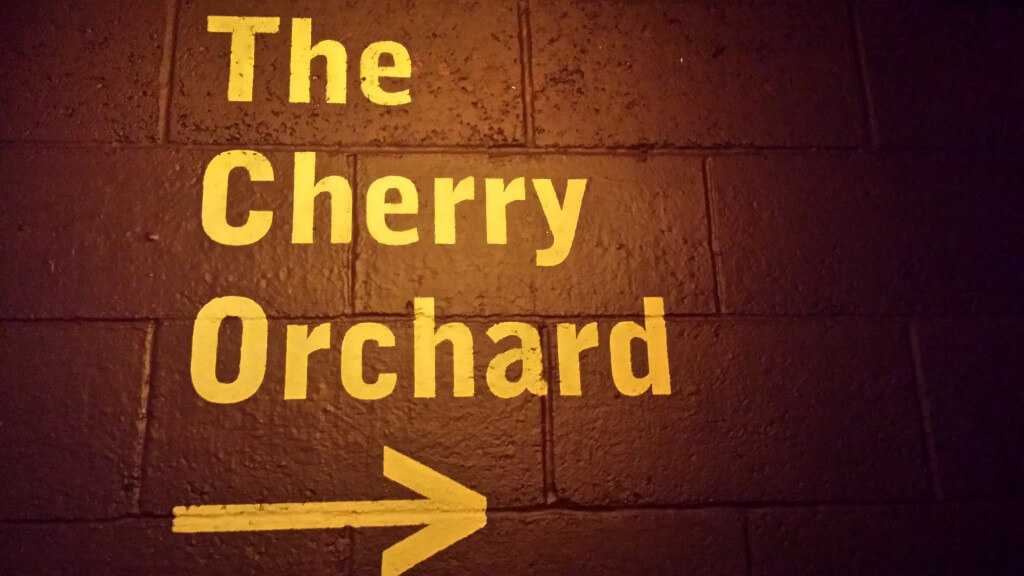 Okay. We’re transported to Russia, inside a big ol’ crumbling house. There’s this poor pretty servant girl and two wispy daughters, all freaking about “Mummy” returning. I’m going to keep calling her “mummy”, despite this being creepy, as I cannot recall her name ever being used.

From what we can glean at this point, Mummy is returning from some ill-thought-out affair in Paris. Everyone’s stressed that returning to this house will trigger her grief for her son that drowned there. Oh, and Mummy is broke now. Scene.

On scurries Mummy and the rest of the family, and for the next hour an a half, I cannot even begin the describe the plot. It’s small instances of complex conversations that I’m sure have meaningful metaphors going on, all linked by inexplicably running everywhere. One dude proposes a toast to a bookcase, Mummy breaks down a couple of times, for some reason everyone is really mean to the frail old butler, and people are constantly referencing being broke-ass-hoes but still find the pennies to pay for a Jewish band to do a gig in their living room. There’s a brief earthquake, a few existential moments, and a bit where the governess stalks across the stage butt naked. She later shouts “I don’t even know how old I am” and takes a bite out of a cucumber before stalking offstage. I’m not sure she was part of the cast, come to think of it.

Ultimately, the house and the estate gets bought out by some douche who is probably the only guy that makes sense the whole play. His assistant then beats up and (spoiler alert) locks the old frail butler in the house as everyone drives off and The Cherry Orchard is chopped down.

After thirty minutes of staring baffled at the stage, I decided to just accept that I would’ve enjoyed the play more if I’d read about the plot beforehand, and allowed myself to be immersed in the strange, bizarre intensity.

I had a few semi-intelligent thoughts throughout. Ah, this is demonstrating the significance of financial power in relationships. Ooh- isn’t the class divide stark, etc. Mostly, I spent the whole time questioning why everyone walks really fast. Like really fast. Even if they’re only travelling from one corner of the stage to the next, they fucking sprint. Why? Is this also a metaphor? Who knows.

Ultimately, it was a fiver well spent, and I would recommend it if you’re a) well into Russian class systems or b) up for flexing your brain muscles a bit.