I try not to revel in the misery of others. The exceptions I make for this rule are limited to: when someone is mean and they stub their toe, when someone I love accidentally sends a text about their ex to their ex, and when someone has to give theatre tickets up.

So when Hazel, the lovely Hazel, sadly passed over her tickets for the Kinky Boots preview night, despite her clear reluctance, I couldn’t help fist pump. Sorry Hazel.

Telling the kinda-true-story of a Northamptonshire shoe factory that, despite their passion for men’s brogues, just can’t shift footwear. The defeated Charlie, who hesitantly inherits the boring business, stumbles across Lola. Lola, a six foot black drag queen who demands the sexiness of blood red and skyscraper heels, struggles to find boots that fit the sauciness bill, and round her size fourteen tootsies.

Lo and behold, in true fairytale musical fashion, this unlikely duo make a dynamite pair, and frolic into the sunset with a song and a touch of sass.

The London production of Kinky Boots was incredible. Lola, the real star of the show, gave me shivers when she sang, and certainly got the biggest laughs out of the audience- for all the right reasons. As with any drag character, there is a way to play them that pays homage to their humour and daring without turning them into pantomime leftovers, and I must say that Matt Henry gives Lola all the life, warmth and wit she deserves.

My love of drag artists and the talent of Matt Henry had me pining after more Lola scenes-  I tweeted Andrew Lloyd-Webber during the interval letting him know I’d be more than happy to throw my money at a musical about her day to day life. Unfortunately, as is so often the case, (I’m looking at you, Orange is the New Black), the side characters are more interesting than the main characters, and Kinky Boots is no exception. As much as you grow to love Charlie, he takes a few scenes before you really feel for him. In fact, it’s not until he has a meltdown, launching an attack on Lola, that I have any real investment in him. I guess that’s the curse of playing a guy who’s defining characteristic is not being all that sure of himself- but Killian Donnely knocks it out of the park when he belts out ‘Soul of a Man’.

The stand out moment for me, despite there being so many to choose from, is an easy win for the incredibly funny The History of Wrong Guys. Lauren, who has an inadvised crush, tries to convince herself- to no avail- that she doesn’t fancy our hapless protagonist Charlie. Funny, light and smart songs like this punctuate the whole show.

Kinky Boots is a real strutter of a show, and I cannot honestly recommend a better way to spend an evening. Not until Lola gets her own solo stint at my local pub, anyway.

For someone who considers anything below Sheffield as the deep South, Cornwall was so far off my radar I was never quite sure if it was a mythical place or not. I spent a good portion of my life thinking it was a separate country, you know, in a Wales-way, before one day looking at a map.

Geographical ineptitude aside, when your boyfriend thinks he’s Cornish, you will end up being dragged onto a five hour train pootling it’s way out west at some point. So off we pootled. 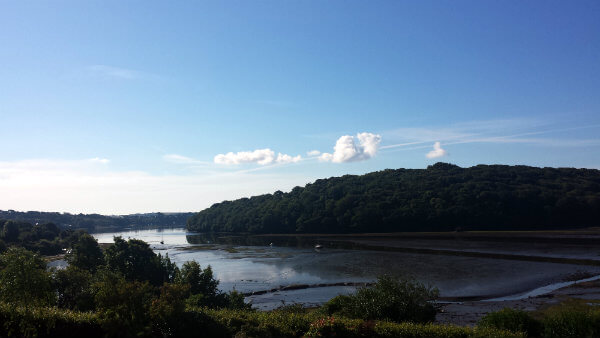 We stayed in a family friends’ place, a gorgeous place with a view of a creek, completed with a croquet garden, and spent most of my time (you guessed it!) eating and Instagramming.

We walked along the Lizard and the surrounding areas. Well, I walked, stopping for photo opportunities every few yards, while the Frost family, who are from/been coming to these parts since they were knee-high pointed out secret coves and told me stories only the locals would know. At the end of the walk we settled in for a spot of afternoon tea, Cornish style (i.e. with copious amounts of cream). 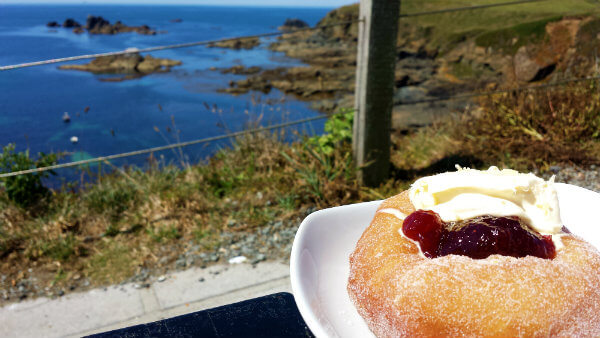 Enormous doughnut with cream and jam. 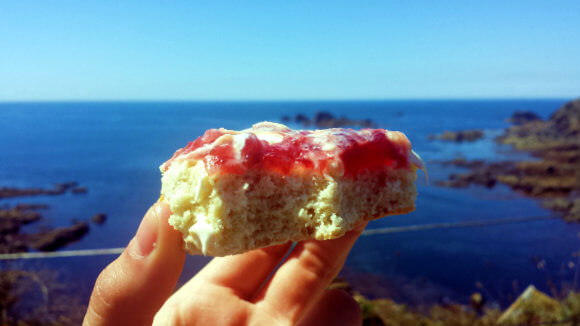 Before heading for a post-pasty nap and swim at Looe Beach.

Saturday was spent exploring Truro, a little city centre that’s about five streets large. We were entertained by the Truro Male Choir, a collection of cute grandads with belting voices that melted my little heart.

The Truro Male Choir, killing it. And spent the rest of the afternoon playing cards, croquet, and admiring the trinkets and vintage-style travel posters we’d picked up from tourist information boards and a spot of kayaking. Well, Jonathan kayaked, I just barked instructions and took a snooze while he paddled away.

Sunday morning, up and at ‘em, we sped off to Saint Michael’s Mount in time for the tide. The Mount, one of Cornwall’s classics, is accessible only at low tide, when the path from Marazion to the Mount is slowly revealed by the waning sea. It’s pretty cool.

The Mount is home to gardens, a traditional castle, and a really lovely exhibition on the life and history of Islanders. Mosying around the castle (with the legions of other tourists) took up a good part of the afternoon, and is definitely worth exploring. Of course, there were the obligatory idiots, and it was sometimes difficult to get a nice snap because some school trip were in the way, but we were there at peak time, so it’s all to be expected. Jonathan’s family really know their way around a kitchen, so all weekend we feasted like queens on scones with freshly made jam, duck and good solid red wine, a trio of fresh fish with capers, roasted poussin and hearty cheese boards. I spent the entire weekend in a food-induced haze, stunned by the scenery, and losing card games. It all came crashing down on the way back to reliable London- with the five hour train having no food cart, and all District lines cancelled from Paddington- but this cosy weekend of National Trust walks and Cornish Cream was absolutely worth it.

I’d seen it mentioned in the usual places, Time Out, every hipster I follow on Twitter, and had concluded that it was probably going to be an over-hyped shipping container crammed with top-knotted men and girls in fedoras where I’d pay a tenner for the honour of having a slightly undercooked burger by a brand with a Helvetica logo. Unusually for me, I told him I’d rather give this one a miss, and can’t we just get a takeaway instead?

Well apparently killing aliens is tough business and he needed to stretch his legs, so two sweaty bus rides later we were swanning through the streets of Brixton with low expectations and a plan B (go get drunk at Kaff Bar) firmly in place.

I was really pleasantly surprised. The area feels roomy, colourful, and there is a lot happening. Shipping containers crammed with ramen bars, vintage shops, and wood-smoking burger joints flogged their wares to a pleasantly tipsy crowd, with a pared-back vibe and the occasional Justin Timberlake booming from a tinny speaker. I mean, it was as hipster as a bearded architect ordering a soya single-shot latte , but it didn’t feel pretentious.

With wide-eyes, Jonathan and I resolved to eat all the food, and set about our little task with frankly inappropriate levels of dedication. For starters, jerk coated sweet potato chips from Mama’s Jerk. For second starters, hot pork gyoza from Kai Ramen Bar. For third starters, gin.

A little frazzled from sitting upstairs in the Greenhouse (true to it’s name, it was properly mafting in there), we pottered into real Brixton to give the market a once over. We stopped off for a few rounds of Connect Four and cocktails at Seven. Jonathan and I are far too competitive to stay friends around boardgames for too long, so we shuffled back to Pop Brixton for round two after a good telling off about the rules of Connect Four.

The main event of the food, for me, was this bad boy. The geniuses behind Bhangra Burgers, an Indian fusion streetfood joint also known as Baba G’s, have reinvented the humble nacho cheese dish with poppadoms and tikka chicken pieces. For dessert, we picked up some Pimms Cider and a Yumi-Tub (weird Thai ice-cream, with brownie chunks all crushed up in) and felt proud of our decisions, but also awfully, awfully full.

On we rolled back to the tube station, as the sun set, the Brixton market traders were packing up and the Pop Brixton hipsters were filing in for an evening of (presumably) house music, feeling smug, happy and a little Pimms-headed.

I’d been warned that Bangkok was an excitable city, that it might be a little overwhelming. For me, it was the perfect opportunity to see the cultural sights, and for the guys I was with, the perfect place to get a taste of Thai nightlife. A great blend of calm and chaos that would keep everyone in the group happy.

We were staying at Dang Derm Hotel, which boasts the address Number One Khaosan Road. Khaosan is famed for the cheap hostels and embodiment of the word ‘bustle’, as well as where Richard, from must-read novel The Beach, starts his lethargic journey to paradise/hell island (stop what you’e doing and go read it. I’ll wait here.) The hotel was perfect. Pretty, quiet enough (considering the honking road outside), cheap, and with the ultimate bonus of a rooftop pool. It doesn’t quieten down until really late (or early, depending on your perspective), so if you’re after a good night’s sleep you might need a night cap and ear muffs to help you on your way.

We dumped our bags, and elbowed our way through the men offering us a tuk-tuk ride, and refuelled at the first cafe we passed with a working fan (three uncomfortably warm Yorkshiremen, what can you do). After sweating off the red curries, I urged us along to the top of Khao San Road with every intention of finding one of the nearby hot spots- the Grand Palace or Wat Phra Keow- when we were ambushed by a kindly Thai dude.

After drawing up a list of temples for us to visit, he flagged down a tuktuk for us and in we clambered, shrugging off our scepticism. He whipped us round the streets of Bangkok, turfing us out every half hour or so to go explore a temple. We checked out a few different temples, unfortunately we were given the wrong names so I can’t be 100% sure I have accurate deets, but one of them was Wat Indrawiban, fo sho. It turns out after a cursory Google that this was a failed scam attempt- with several reports of the exact same thing happening to others, but other than a few awkward exchanges in tailors we didn’t want to go to, it didn’t cost us a penny as our driver abandoned us after a while. Thankfully our scammers were only half-hearted, lesson learnt. Stay safe, kids and fellow idiots!

After a few hours of pottering around temples, the jet lag hit us, so we flagged another eager tuktuk and head back to Dang Derm to lounge the rest of afternoon off with a cocktail by the rooftop pool, feeling pretty freaking fancy. 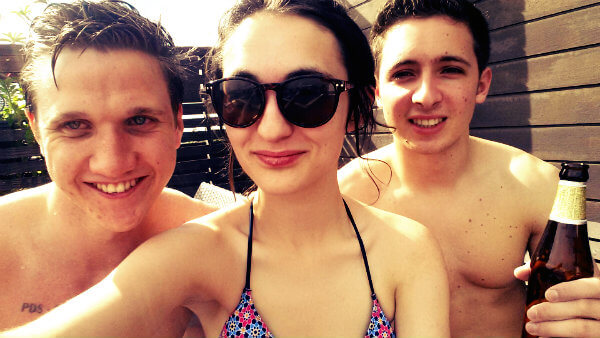